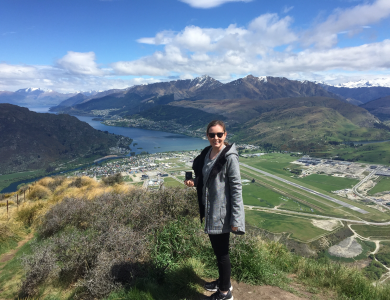 The light reaching the eye confounds the proportion of light reflected from surfaces in the environment with their illumination. To achieve constancy in perceived surface reflectance (lightness) across variations in illumination, the visual system must infer the relative contribution of reflectance to the incoming luminance signals. Previous studies have shown that contour and stereo cues to surface shape can affect the lightness of sawtooth luminance profiles. Here, we investigated whether cues to surface shape provided solely by motion (via the kinetic depth effect) can similarly influence lightness. Human observers judged the relative brightness of patches contained within abutting surfaces with identical luminance ramps. We found that the reported brightness differences were significantly lower when the kinetic depth effect supported the impression of curved surfaces, compared to similar conditions without the kinetic depth effect. This demonstrates the capacity of the visual system to use shape from motion to “explain away” alternative interpretations of luminance gradients, and supports the cue-invariance of the interaction between shape and lightness.